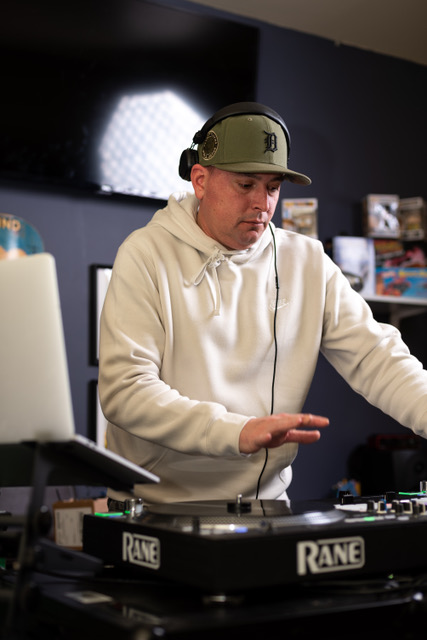 Our Mixtape Master…Don’t believe me? Go check out our Mixcloud @djdcproductions

Robert Ballard, AKA Rob Beatz, is a transplant from the West Coast, having moved to Michigan with his family in 2019. Rob was born into a very musical family full of musicians, dancers, singers, DJ’s, and producers.  Musicianship was so prevalent in the family that Rob began playing the piano as a toddler!

In his early teens Rob was part of Breakdancing crew Aerial Assault and  Elements in Northern California. As part of the Elements Crew he traveled and performed for the D.A.R.E. program. In the late 90’s Rob’s brother in law, a Bay Area event promoter and DJ, taught him the secrets of the “wheels of steel” and a lifelong love of DJ’ing was born. Rob took to the turntables right away, he realized that bringing people together on the dance floor through a shared love of music was exhilarating and fulfilling. Rob has been extremely fortunate to have had an opportunity to work the club scene in Santa Cruz Ca in the early 2000’s and eventually transitioned to DJ’ing special events and Weddings. Rob even began producing his own music and was honored to be selected as one of 8 finalists from 2500 submissions to compete in the Bay Area Producers Conference where he ended up taking 3rd place.

Rob is an open format DJ who enjoys all genres of music but RnB, Hip Hop, Rock, 80’s, and Latin classics hold a special place in his heart. Rob is thrilled to have the opportunity to share his west coast style with his clients.